Our armband symbolises a starry night in the desert by putting together these two geological components that are so important in Almeria. You can also see some other secondary icons.

What fiction will be developed during the match between both sides? It is hard to guess, but what we do know is the film heritage related to this Andalusian province.

It is associated with the desert landscape of Tabernas, the location for Spaghetti Western cult film genre, which saw a mixture of shrubs, succulents, herbs and a few grasses, desert balls, red canyons, as well as meanders and a blazing sun together with bullets and Western iconic duel fights. Take Sergio Leone’s Dollars Trilogy: A Fistful of Dollars (1964), For a Few Dollars More (1965), The Good, the Bad and the Ugly (1966).

The clash will face two teams that share the dream of being promoted to LaLiga Santander and playing with the best stars.

A bright sky has been added under this starry concept, referring to Calar Alto Observatory in Almeria (the biggest in Europe), where two new Earthlike planets were discovered a couple of years ago at just 12.5 light years from the Earth in Teegarden’s star system (Teegarden b and c). This explains the two bigger stars depicted in the infographic about the armband design. 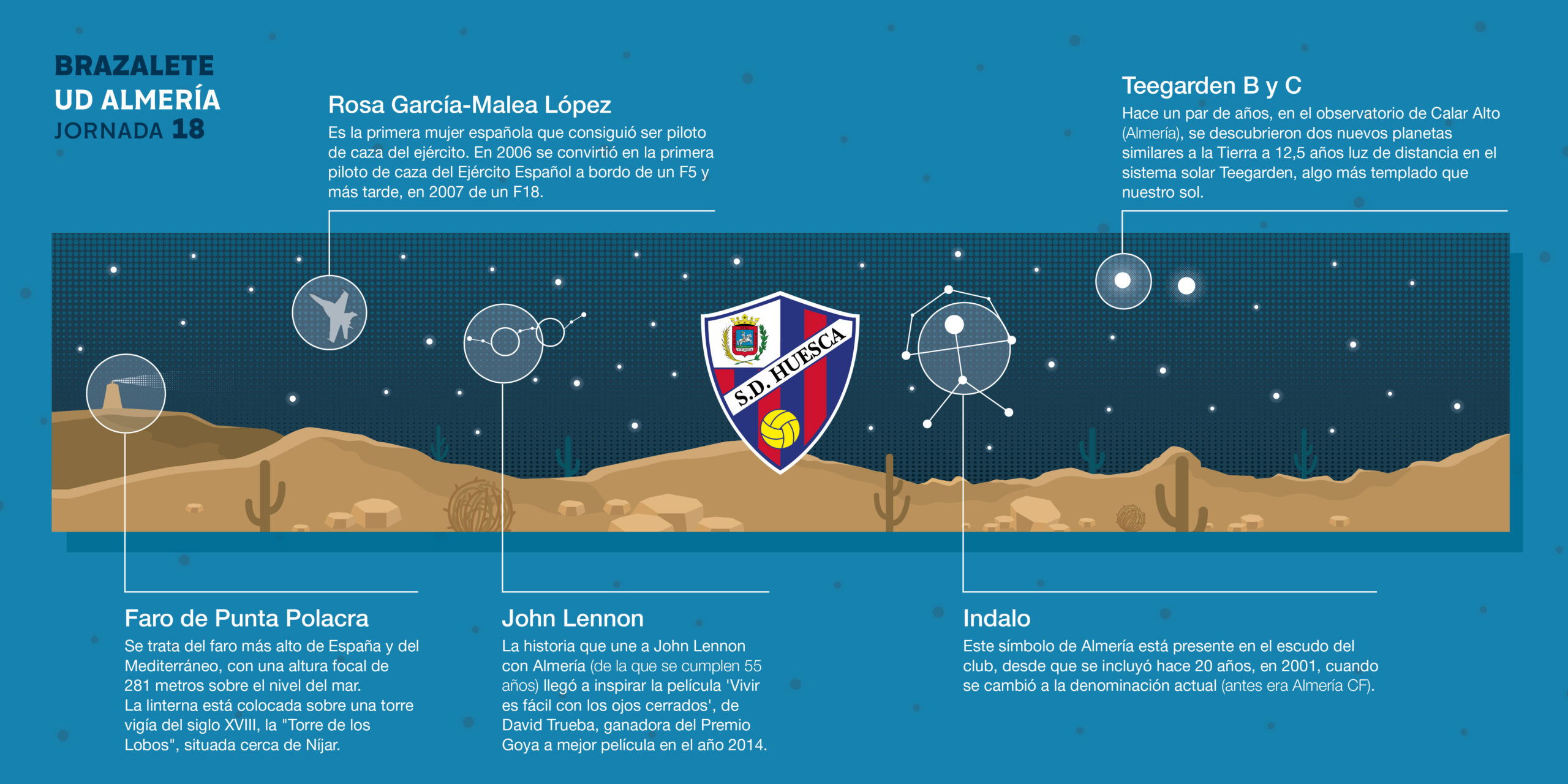 The armband is also composed of other elements which are as important as those mentioned above. We will explain them from left to right. The first one is the Punta de la Polacra Lighthouse, which lights up the design. It is the highest lighthouse in Spain and the Mediterranean area (281 metres above sea level).

Next to it, there is a military aircraft taking off. It represents Rosa García-Malea López’s achievement, who became the first female fighter pilot in the Spanish Air Force after qualifying to fly jet fighter aircraft.

The armband depicts two more elements that belong to the history of the city. John Lennon’s glasses, since the musician left an indelible imprint on the hearts and minds of people in Almeria when he shot Richard Lester’s How I won the war in 1966. During his stay in this Spanish city, he composed Strawberry Fields Forever.

And finally, there is the UNESCO World Heritage Site indalo, a prehistoric symbol found in the cave of Los Letreros (The Signboards) back in 1868.

Indal eccius, messenger of the Gods, strong, powerful and protective, has been depicted in UD Almería’s badge since 2001. We hope his magic does not work in Saturday’s game.