SD Huesca face the promoted side UD Ibiza on Saturday 26th February (kick-off 16:00 GMT+1), in a unprecedented LaLiga SmartBank trip. It could prove crucial in the Azulgranas’ top-four fight for play-off positions.

The armband tailored for the occasion highlights the playful aspects of the history and the identity of this Mediterranean island. The floral motifs that we can see in the armband make clear reference to the hippie movement that originated in the 1950s and spread around the world in the 1960s.

If we speak about Ibiza, we are to talk about happiness and music, too. The island of freedom is one of the world’s leading locations of electronic music, frequented by the biggest renowned producers and DJs. Amnesia and Pacha (with its characteristic red cherries, although we like Bolea’s better) were the first clubs in the 1970s to host the best night life in the white island.

Did you know that the island is also called Pitiusa because it has a great quantity of pine trees? The name comes from the Ancient Greeks, when the term pitys meant pine forest. Going back in time then, the Greeks and the Romans called Ibiza and Formentera the Pitiusas Islands due to the large population of such kind of trees.

Ibiza has its own endemic lizard, the Podarcis Pityusensis (nowadays an endangered species), whose colourful pattern, which combines turquoise, grey and dark brown, has served as the background of the graphic design of our armband.

We’ve wanted to depict the island’s biodiversity and culture in our design, as Ibiza was inscribed on UNESCO’s List of World Heritage Sites due to a collection of four cultural and natural sites: The Phoenician archaeological sites at Sa Caleta (settlement), the Puig des Molins necropolis, the fortified Upper Town (Dalt Vila), and the dense prairies of oceanic Posidonia (seagrass).

In the infographic about the armband design below, you can see three important items related to the island’s identity. The magnificent monument of Andrew Rogers “Time and Space” at Cala Lentia, which has 13 columns and represents from 2014 the movement of the planets around the sun, according to its designer. Its setting up was covered by the creator of the Cirque du Soleil, Guy Laliberté.

From this controversial monument we can see Es Vedrà, a magnetic location that is also part of the graphic composition of our armband. This islet, located in the West of Ibiza, is considered to be almost magical, as it is a source for legends and strange events, according to locals and fishers (hopefully we won’t see anything unusual during the match against UD Ibiza this Saturday.)

The armband is completed by the 16th- and 17th-century watchtowers that were used to examine strangers’ and pirates’ ships.

It will be a duel full of diversity – just like the armband itself – between two sides that are looking to rise up the league table, and where we hope we will see the best version of our team, maintaining the winning run of the last games. 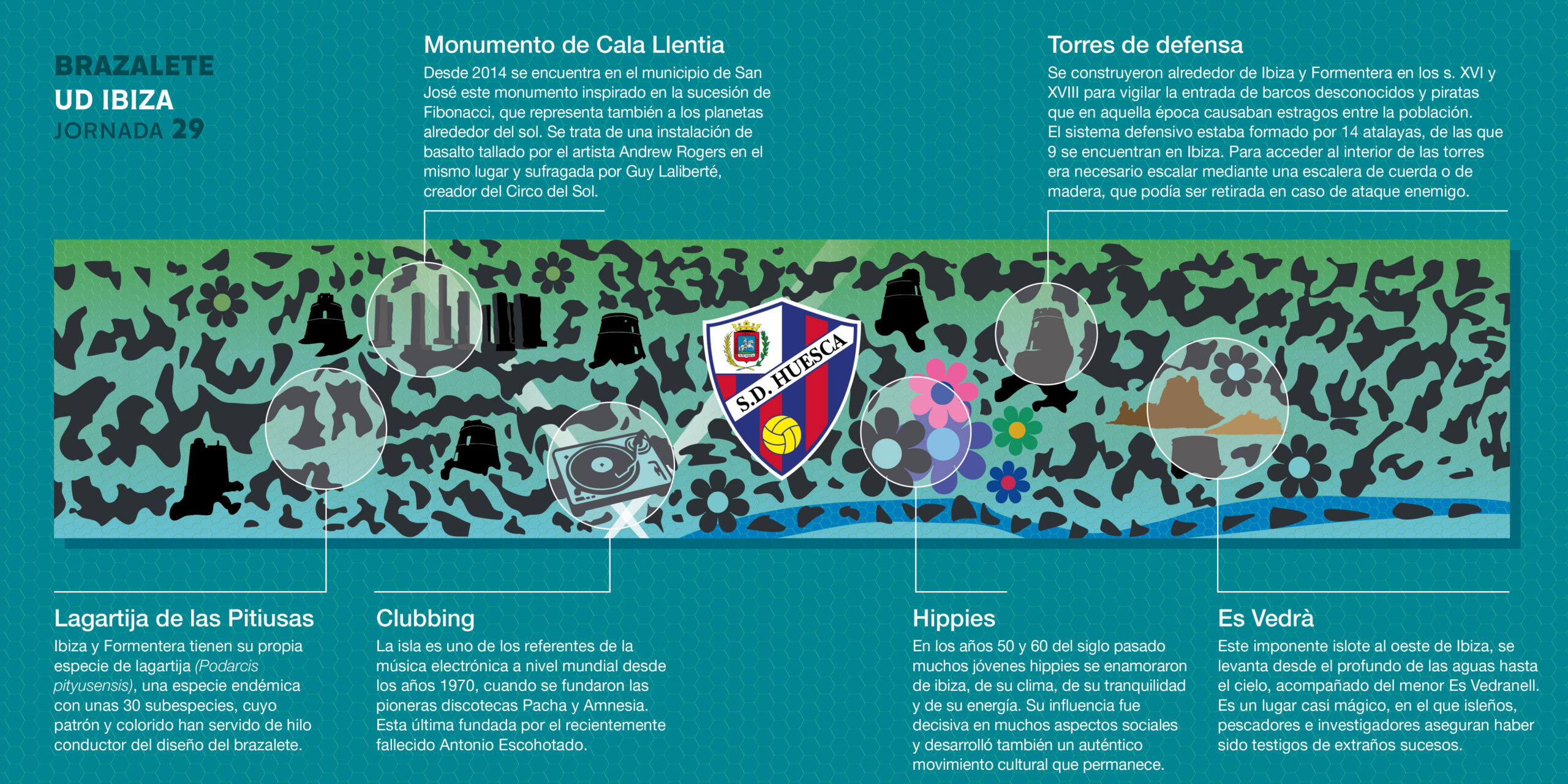