ARMBAND FOR SD HUESCA VS REAL SOCIEDAD B

Next Friday, September 24th, SD Huesca will travel to Saint Sebastian to face Real Sociedad ‘B’ in matchday 7 of LaLiga SmartBank.

You can see below the tribute armband that will be worn by our captain during the match:

The design is mainly dedicated to Eduardo Chillida, a sculptor, and Elías Querejeta, a film producer. Both of them are artists of the 20th century closely linked to the culture of the Txuri-urdin club. Did you know that the two of them played for Real Sociedad? 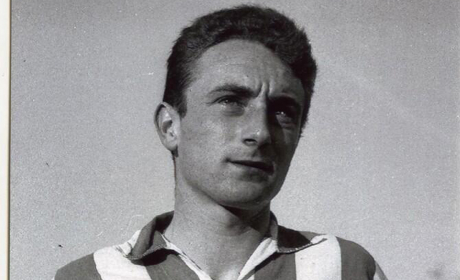 On the one hand, Eduardo Chillida was Real Sociedad’s goalkeeper at the age of 18, during the season 1942-43, when they promoted to Primera División. Unfortunately, a serious knee injury made him retire, right before playing in the Spanish top championship.

On the other hand, Elías Querejeta was Real Sociedad’s midfielder in the 50’s – he started his career soon before the second team was created and he even scored a magnificent goal in Atocha against Di Stefano’s Real Madrid. After a somewhat irregular career as a footballer, he retired when he was 23 and went to Madrid to pursue his cinema career, making his dream come true. Apparently, the following anecdote with Chillida influenced his choice.

Elías used to go to the training session from Hernani (the town where Chillida had moved in order to learn the craft of forging and where he would subsequently set up his workshop) to Saint Sebastian. During the journey on the tramway, he used to meet Eduardo, who started to stand out as a sculptor. The latter would suggest him retiring from football, since it would only take up a lot of time from cinema.

Due to Chillida’s injury, his career as a brilliant keeper for Real Sociedad was cut short, but it left us an eternal legacy thanks to all his iconic works. There is no doubt that the Spanish cinema won a great deal of good films.

Although their careers led them professionally away from football, both always kept their love for Real Sociedad. 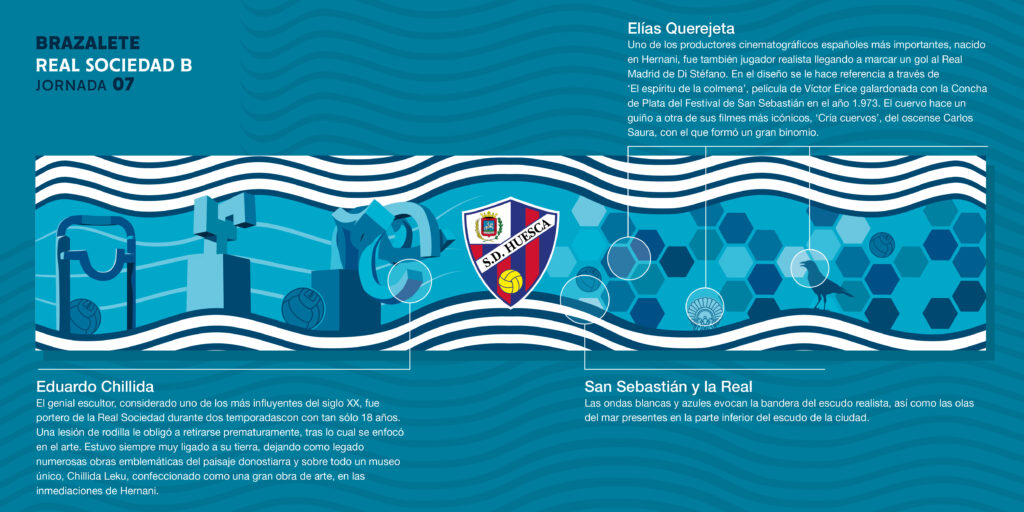 The armband’s design is split in two halves, each of them dedicated to one of the artists.

Before you continue to read, can you recognize all the symbols on it?

On the left side, you can spot Chillida’s sculptures, such as The Comb of the Wind (he made up to 23 figures in that series of sculptures), the Monument to Fleming and the Arch of Freedom.

The right side refers to some of the most emblematic titles of Elías Querejeta’s career, like The Spirit of the Beehive (a film for which he was awarded his first prize as a producer, the Silver Shell at the Saint Sebastian International Film Festival) and Cría Cuervos (Raise ravens), a film by Carlos Saura, a popular director from Huesca. Together they actually were a great double act.

All these elements are framed inside the white-and-blue waves that serve as a link in the design. They are a reminder of the current flag in Real Sociedad’s logo, as well as the sea waves which appear at the bottom of the city’s coat of arms.