Next Monday, October 11th, SD Huesca will face our region rivals, Real Zaragoza. This will be the Aragon derby, in matchday 9 of the Spanish second tier, LaLiga SmartBank.

What better homage to our neighbours and rivals than recalling one of their most popular symbols: the patron saint of their city, Virgen del Pilar, “tape Measure” (“Medida”). An armband measuring exactly like the Virgin, 36.5 cm, has been made for this occasion.

You can see below the Virgen del Pilar Measure’s made-to-measure tribute armband that will be worn by our captain during the match:

The tailored armband will shine in the match on a relevant date, since the game will take place during the Fiestas del Pilar festival 2021, turned into the “Cultural Week” this year due to the COVID-19 pandemic. In this regard, the armband is undoubtedly a tribute to the neighbouring city, its festive traditions and its most notable symbolic elements.

The creative process was based on this concept, being expressed not only in the idea but also in its layout and illustration. The most recurrent graphic elements on the “Medida” have been replaced by different local high-profile individuals. Each and every reference is presented on the infographic below: 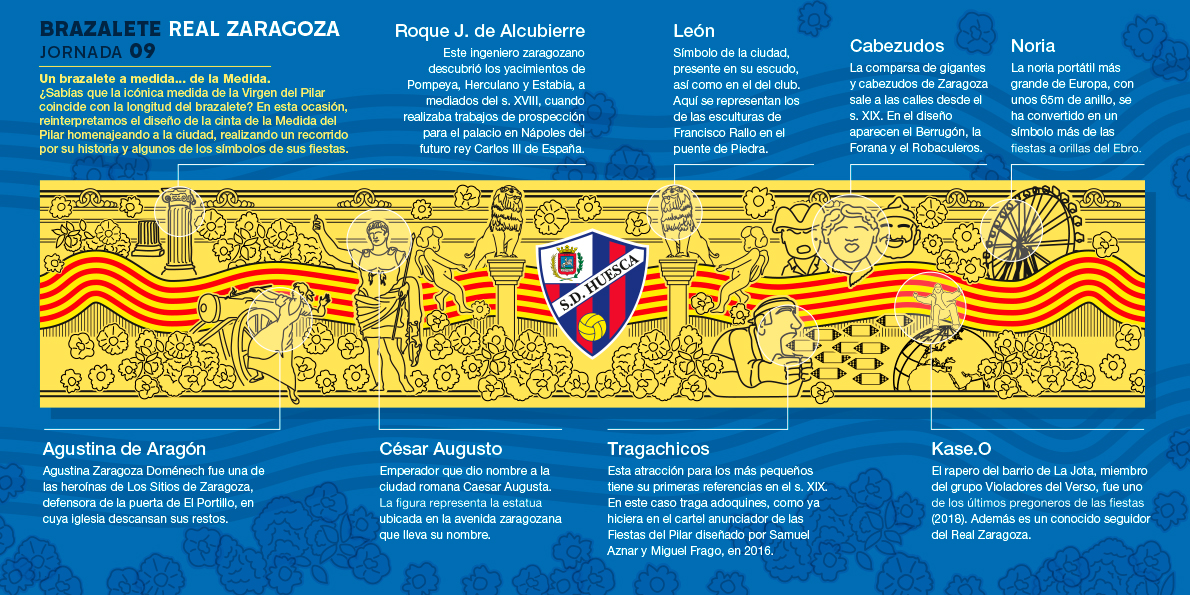 From left to right and following the aesthetics of the Virgen del Pilar “Medida”, we can find Agustina of Aragon. She is one of the heroines who defended Spain during the Spanish War of Independence and the Peninsular War against the invading and occupying forces of France. Her remains lie in Nuestra Señora del Portillo church (Zaragoza) since she protected the city through its siege. It is strictly forbidden to invoke her for the match, Mañicos! 😉

If we are to talk about historical figures related to Zaragoza, we must do it about Caesar Augustus. The emperor after whom the Roman town Caesar Augusta is named has several sculptures around the city. The highest one, made by Oscenses, is 10 metre high and located at Puerta Cinegia gastronomic market.

Roque Joaquín de Alcubierre is another historical figure for the city of Zaragoza. He was a local engineer who discovered the architectural remains of Pompeii, Herculaneum and Stabiae in the 18th century.

The right side of the armband depicts the lion, always present in our rival team, from their badge to the coat of arms of their city, and at each end of the Puente de Piedra bridge, designed by the Aragon sculptor Francisco Rallo Lahoz.

But if we want to find out more about almost mythological creatures, we have got the Cabezudos (big heads). They do not run as much as a lion… but almost! Berrugón, Forana and Robaculeros will run from the 10th to the 17th October… Can you imagine they were invited to kick off the game?

Another symbol of the Fiestas del Pilar festival in honour to the patron saint of the city (Virgen del Pilar) is the Mirador Princess Wheel on the banks of the Ebro, the biggest portable wheel in Europe.

It is a heavyweight wheel… just like Javier Ibarra Ramos’s voice, better known in the popular verse as Kase.O. The rapper, a big fan of Real Zaragoza (he was even tested when he was younger), made the opening speech during the Fiestas del Pilar festival 2018. But that’s another story…

Finally, we can see all kids’ favourite character: Tragachicos. It has become a cool attraction lately, but its first references date back from the 19th century. The one displayed in the design looks hungry while wolfing down the most vintage souvenir in the city, an adoquín sweet (referring to the winning poster of the Fiestas del Pilar festival 2016.)

All the abovementioned elements are illustrated on a graphic base referring to the shape, aesthetics and design of the characteristic Virgen del Pilar “Medida”, very storied 36.5 centimetres.

It is an armband full of flowers, recalling the Flower Offering to the Virgen del Pilar that takes place on October 12th every year in Zaragoza, which is also depicted in the design of the original Medida.

An armband measuring up to the Measure standards required.