SD Huesca will travel to Oviedo away from home in LaLiga SmartBank to play next Sunday 13 February at 16:00 GMT+1 at the legendary Carlos Tartiere, one of the reference stadiums of former times football. The clash against the Asturian side is expected to be hard-fought, and hopefully we’ll see the Azulgranas put the best version of themselves out, as they did last week against Mirandés at El Alcoraz.

In this armband, we have reflected the colour range related to the two clubs that merged, giving birth to the current Real Oviedo: Real Stadium Club Ovetense (1914-1926), in yellow and blue, and Real Club Deportivo Oviedo (1919-1926), in white and blue. Therefore, the armband breathes its own history and links two clubs together by combining their colours. Also, both sides used to depict an old leather ball in their badges, the same football we can see on our armband, paying tribute to them. All these elements provide uniqueness to the graphic design and strengthen the identity of the club and their origins. 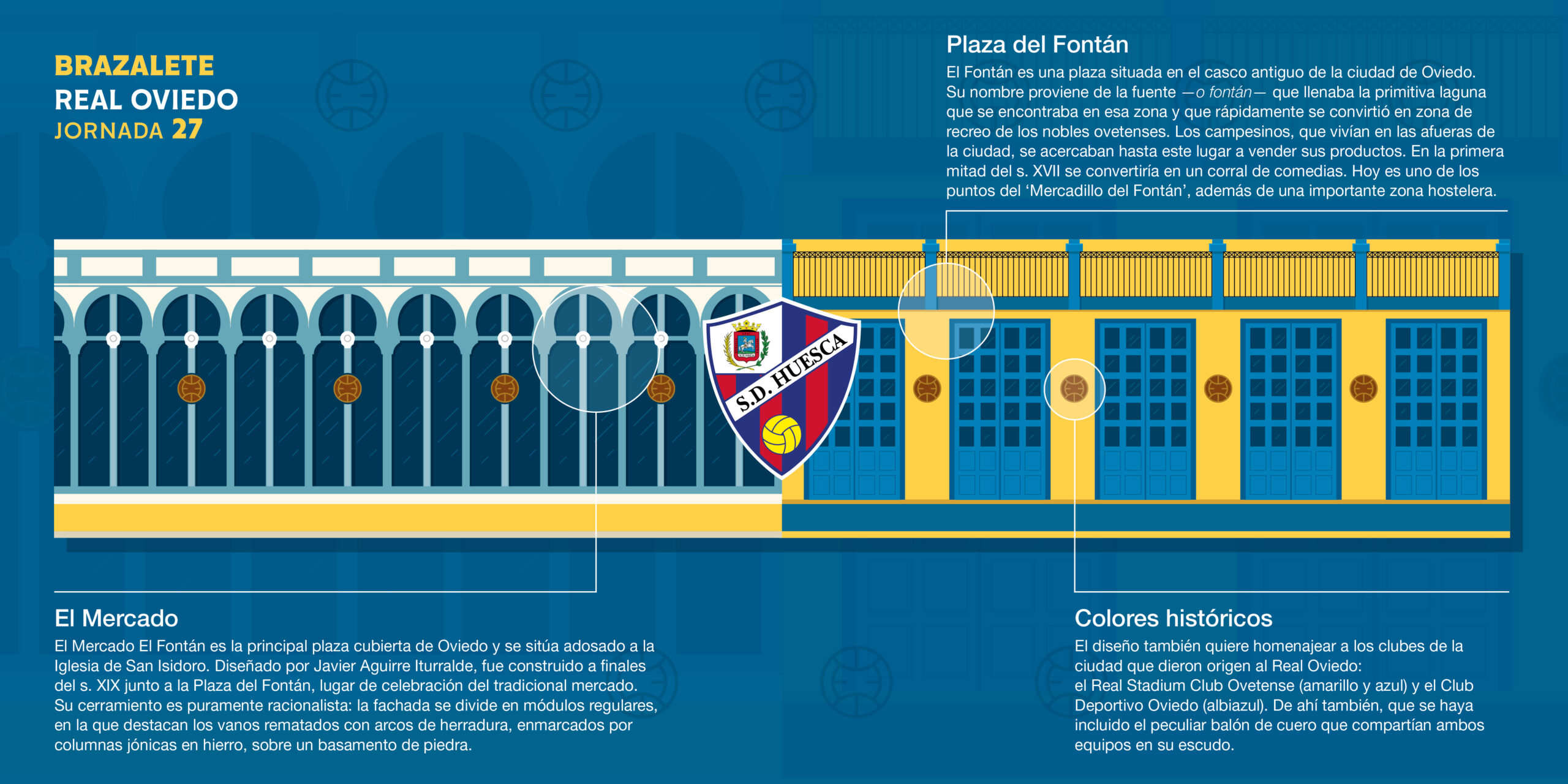 The armband depicts two parts with different colours: Plaza del Fontán and the marketplace (Mercado). On the right side of the infographic, you can see Plaza del Fontán, symbolised in one of the most charming catering premises in the square: Casa Ramón. Such square was originally placed on a natural pool full of springs and fountains – hence its name –, where the locals spent their spare time and marketed their products back then. Plaza del Fontán was erected over the pool in the 18th century, highlighting its arcades and its brightly coloured houses (as in the infographic), and was reopened in 1999.

Together with the square but on the left side of the infographic, you can find El Fontán Marketplace. It’s a closed market designed by architect Javier Aguirre Iturralde in 1885 – in blue and white (Real Oviedo colours). It’s included in the Catalogue of Protected Buildings in Oviedo, and fills the city with a splash of colour. Today it’s a place for social gatherings either to market, to have a drink or even to make a toast maybe to Real Oviedo’s success.

Real Oviedo is one of the classic clubs of Professional Football in Spain. Despite the fact that they have been playing in the Spanish second tier for a number of seasons already, Real Oviedo was once one of the biggest teams in Primera División. Last year, they celebrated the 20th anniversary of their first participation in UEFA (the current Europa League), and this year marks the 60th anniversary of their debut in the International Football League, a tournament composed mainly of American and European teams and held in different cities of the US.

This club has a lot of history behind, and has welcomed very successful managers, such as Javier Irureta, Luis Aragónes, Radomir Antic, Tabárez and Fernando Vázquez (among others, like Mr. Pentland, Patrick O’Conell or Vicente Miera), who did their bit to extol Real Oviedo’s reputation.

An old acquaintance for SD Huesca fans plays now for the side from Asturias: We’re talking about the striker Borja Bastón, who took part in our team in the 2012/2013 season. Hopefully, he’ll be far away from our goal next Sunday.