On January 9th, SD Huesca face the first away encounter of the year against FC Cartagena, in matchday 23 of the domestic competition.

You can see below the armband tailored for the occasion that will be worn by our captain during the clash:

The creative process to design the armband is based on the identity of the city of Cartagena as well as on its cultural and architectural heritage from the Roman world. For this purpose, we have taken inspiration from the artistic technique of the mosaic – a variety of historical symbols and leading figures from the city are depicted on the armband, while the Edificio del Mosaico, located in the Roman Forum Museum and recently restored, can be easily recognised.

We have thus turned the armband into a sports mosaic, by providing it with the function of letting us know about all the displayed items. 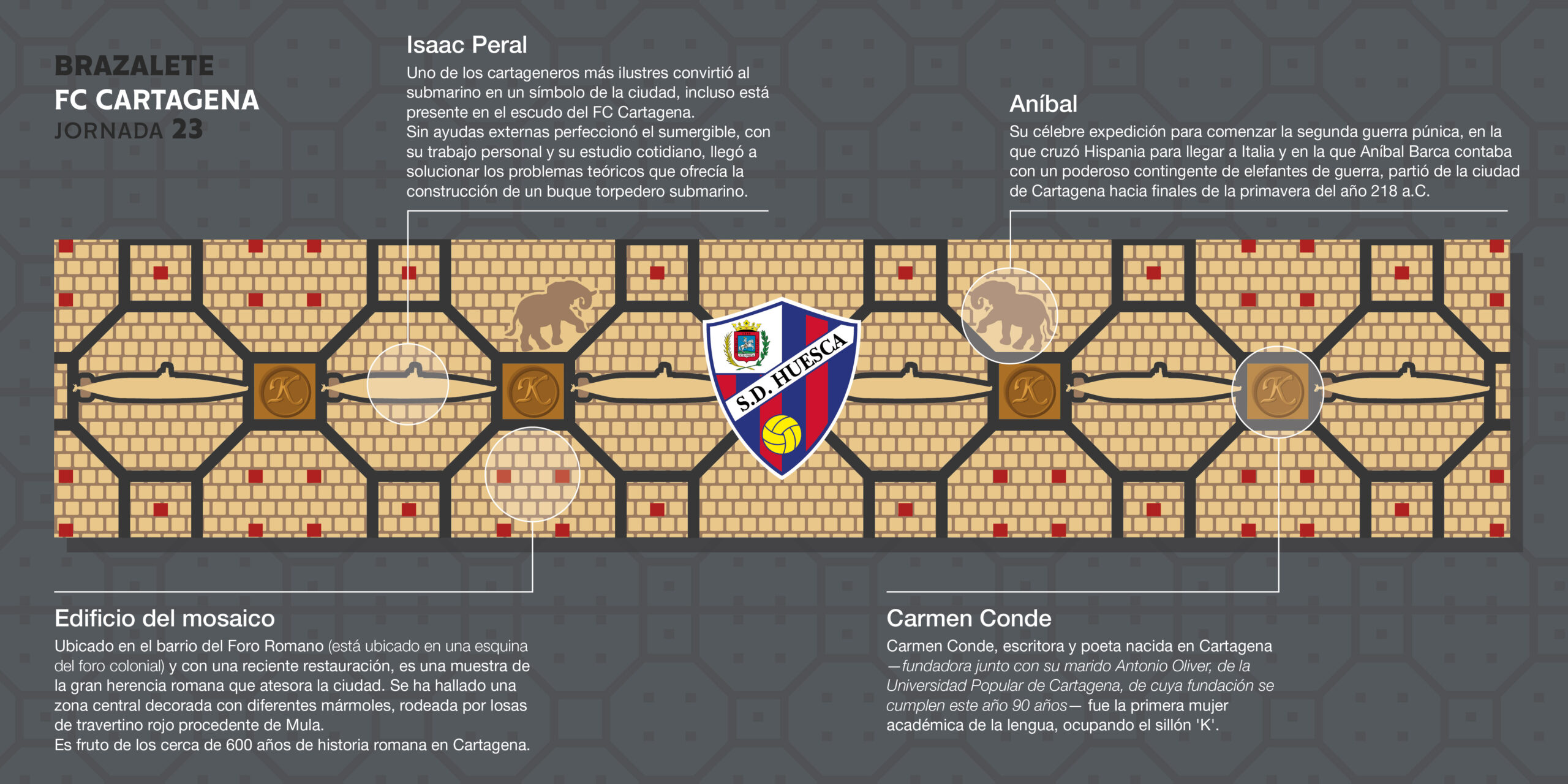 The ‘K’ is significant in the infographic about the design of this armband. That letter pays tribute to Carmen Conde (Cartagena, 15 August 1907 – Madrid, 8 January 1996). She was a Spanish narrative writer, poet and playwright, appointed to hold the Royal Spanish Academy (RAE, in Spanish) seat labelled with the uppercase ‘K’ in 1978 as an academician. This way, she became the first female academician to hold a seat in said institution.

Nevertheless, not only is Carmen Conde an outstanding figure in Spanish literature and the first female academician in the RAE, but she is also the co-founder and director of the Popular University of Cartagena as well as of the Rubén Darío Archive in the Complutense University of Madrid. She was awarded with the National Literature Prizes for Poetry (1967) and Children’s and Young People’s Literature (1987).

Elephants and submarines on the same armband… it sounds like a fantasy, right? Well, let us explain ourselves! On the one hand, in the case of the elephants, it comes from an expedition commanded by Hannibal Barca from Cartagena to the Alps, where the Carthaginian general invaded Italy by crossing the Alps with 68 war elephants, which sparked the Second Punic War in late spring of 218 BC.

On the other hand, the watercrafts mentioned in the infographic refer to Isaac Peral y Caballero, one of the most renowned neighbours of Cartagena. He used all the available means at the time to perfect a series of theoretical and conceptual problems on the construction of the vessel.

Actually, Peral created the first successful full electric battery-powered modern submarine back in 1888. This milestone is incorporated in the graphic novel ‘Isaac Peral’, written by Alicia Vallina and designed by María Pedrosa.

Today the submarine is depicted in the badge of our opponent, and it is an advertising ploy of the city of Cartagena.

Everything is then ready and set for a different fight, a sports battle full of fair play. Although we cannot count on the assistance of submarines or elephants, we will have XI warriors giving their all to come back to Huesca with some rather valuable spoils of war – more than three points.

Keep following the posts on our Fan Club website to find out more about our upcoming armbands.