Alcorcón is sport, and not just football. Although Madrid does not have a beach, it does have water polo. The influence of this sport and its legacy in the capital city of Spain are featured in the armband tailored for the occasion, on a yellow and blue background, the colours of the club.

Thus, the aforementioned sport is very present in Alcorcón, in the south of Madrid, and we can highlight some figures, such as Miki Oca, the coach of the Spain women’s national water polo team, who used to play for Club Natación Ondarreta Alcorcón. Pioneer of this sport, he won two Olympic medals (gold in 1996 and silver in 1992), three World medals (gold in 1998 and silver in 1991 and 1994) and five European medals.

Apart from him, some other water polo legends made in Alcorcón have shone in Spain: Moro brothers are the reference of this sport in Alcorcón; besides, Pili Peña, who won a silver medal competing for the Spain women’s national water polo team in the women’s event at the 2012 Olympics, and is a World and Europe champion, too; or even Carlos Hernández, among others, who is a Down’s Syndrome swimmer that has won more than fifty medals in both national and international championships.

Obviously, we cannot forget about a manager of the first water here, at El Alcoraz, who led AD Alcorcón as well: Juan Antonio Anquela. This time, we come back to football to recall the day when Anquelotti led the way of the giant-killers AD Alcorcón to the victory over Real Madrid 4-0 in Copa del Rey. Some months later, his side would be promoted to the Spanish second tier. AD Alcorcón are the team that have played the most consecutive seasons in Segunda División – It’s their twelfth this year.

Alcorcón is related to jota. The traditional folk dance of Madrid is twinned with the jota from Aragon. It is a dance that Emilita Rodríguez Montesinos has always tried to revitalise by means of training and disseminating information about it. This is the reason why we have included this renowned art – danced and heartfelt – in the shape of a castanet, representative of the jota.

Furthermore, this armband recalls Jesús Bibang González, Jota Mayúscula, as well. A DJ, rap and hip-hop producer born in Alcorcón who popularised hip-hop culture, who would have turned 50 this year (AD Alcorcón celebrated their 50th anniversary last year). Together with his band CPV, he was one of the greatest benchmarks in the 90’s in Alcorcón, popularising hip-hop culture and musicality. He was also a newscaster and a director on Radio3, and made national and international urban music – especially hip-hop and rap – gain a higher profile. 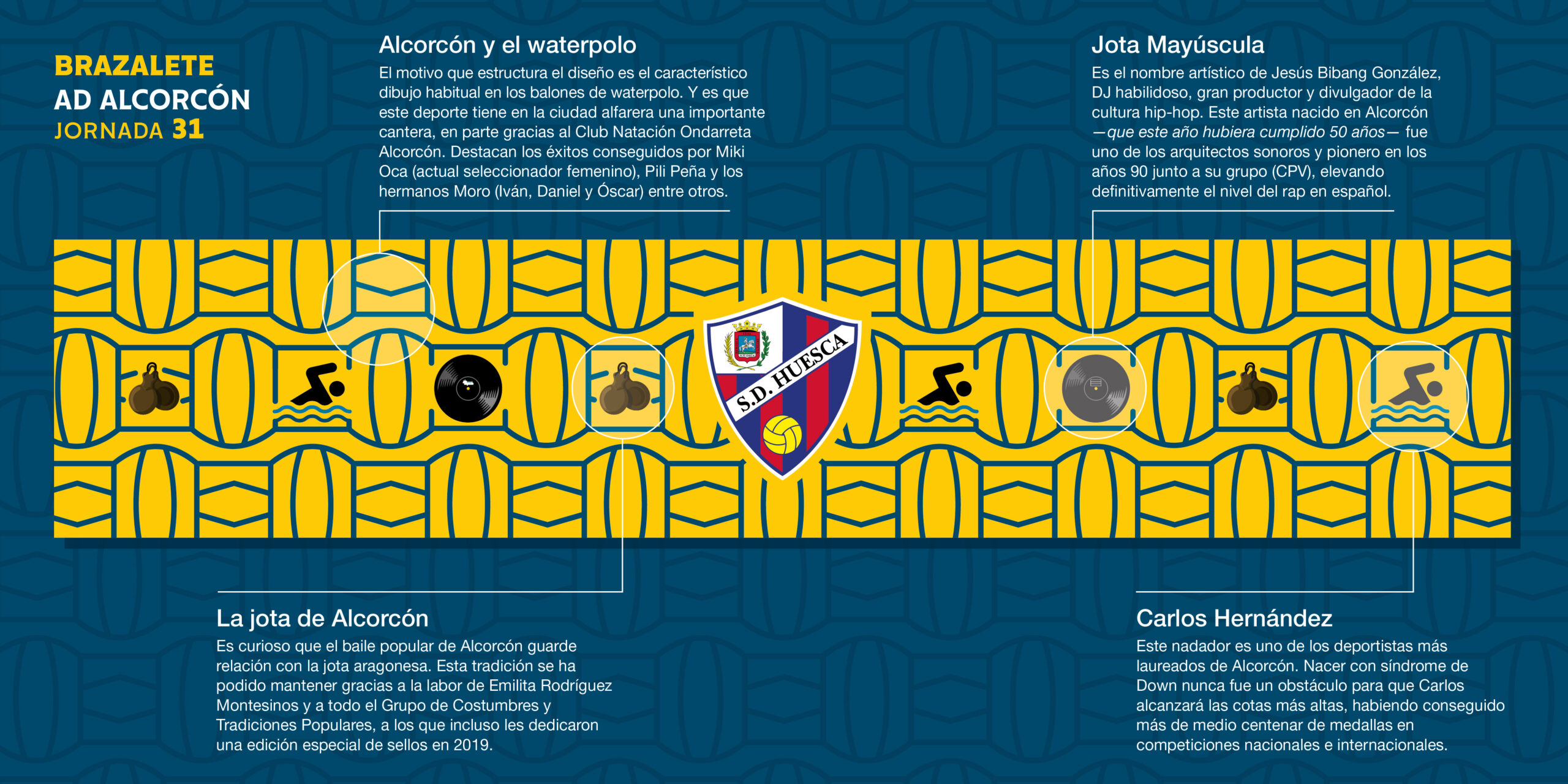 Did you know the motto of their fans? We’ll embrace their #hastaelúltimominuto and hope SD Huesca never give up searching for the victory until we find it… #untilthelastminute, if necessary.