SD Huesca’s next LaLiga Smartbank game is away at Eibar’s Municipal de Ipurua stadium on 29 January (matchday 25). Our rival is one of the candidates to complete the end of the season at the top spots of the table.

Our recent history links us together with Basque club SD Eibar, as SD Huesca made our Primera División debut in the 2018/2019 season at Ipurua with a historic 1-2 victory (first one ever in Primera División).

Eibar and Ipurua have given the Oscenses so many memories to cherish. We share with the so-called Armeros (Gunsmiths) a series of elements related to our identity: firstly, both clubs are incorporated as a Sociedad Deportiva and wear blue and red kits, colours present in the armband tailored for this occasion. Besides, we have in common the Saltire, also known as the Cross of Burgundy – in the form of a diagonal cross –, represented in the flags of the city of Huesca and Eibar, as well as in the coat of arms of SD Eibar. 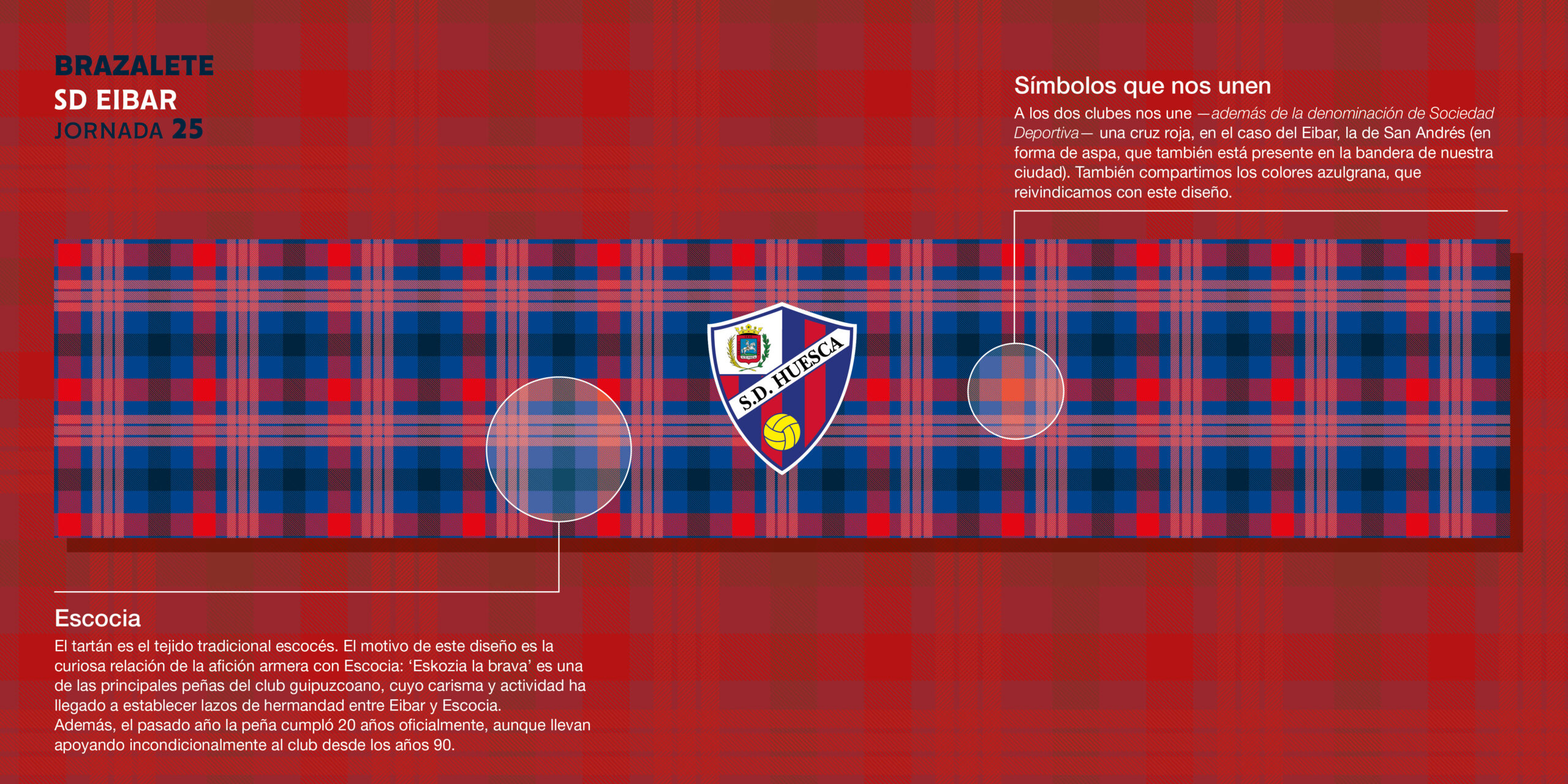 As you can see in the infographic, the patterned cloth – usually associated with Scotland – consisting of criss-crossed, horizontal and vertical bands in different colours is known as tartan. But what does it have to do with our armband and the match? Well, there is a curious link between the Armeros and Scotland, who have even established friendly ties.

‘Eskozia la brava’ supporter’s club, one of Eibar’s oldest and most important ones (last year they celebrated its 20th anniversary), claim to be fans of ‘Braveheart’ and the values transmitted by its main character, shared by Eibar’s philosophy. It is a humble team who make trouble with their sports weapons, always getting up and growing in the face of adversity no matter the obstacle in front of them. Does this philosophy ring a bell? 😉

Such is their passion for Scotland that Eibar played a game against Celtic FC to celebrate the Basque club’s 75th anniversary. About 500 Celtic fans attended the match, where some of them played the bagpipe and gunsmiths offered a special ceremony.

Also, the Scottish (of course!) journalist Euan Mc Tear is the writer of ‘Eibar the brave’, a book about the milestones reached by the Gunsmiths in recent history, after they were promoted to Primera División in 2014. His book has been sold in countries like Australia, the US, UAE and of course Scotland.

All in all, next Saturday we’ll see a clash between two clubs with a number of details in common, where hopefully we will enjoy SD Huesca’s very best version, just like in our last away encounter against Cartagena