With this armband, we would like to pay tribute to an emotional and touching landmark: SD Huesca are proud to be celebrating the 50th anniversary of the construction of El Alcoraz.

It is an armband full of emotions and symbols which honours what has been home to all the Oscenses and SD Huesca fans. It will be worn by our captain during the match against SD Ponferradina on 23rd January.

The opening of El Alcoraz took place on 16th January 1972. The newspaper Nueva España expressed: “Alcoraz, a new sports venue in the same league as SD Huesca and the city of Huesca.” That is how El Alcoraz, the football stadium hosting the Azulgranas’ games that has seen the team reach major milestones, was born. The club is committed to rejuvenating the venue, by taking major steps towards expanding its capacity and upgrading its services.

The design of the stadium was initially conceived by president José María Mur, who sadly passed away very recently. After some years of work, his dream came true. Since then and following our promotion to the Spanish second tier, in the 2008/2009 season, it has been upgraded and modernised, by expanding its capacity and carrying out a comprehensive transformation.

Architect Raimundo Bambó and master builder Luis Pie – both of them SD Huesca fans – joined the project and expanded capacity throughout the stadium, bringing it from 5,263 to more than 9,000 after being promoted to the Spanish first tier in 2018, this time by architect Nacho Lacarte. 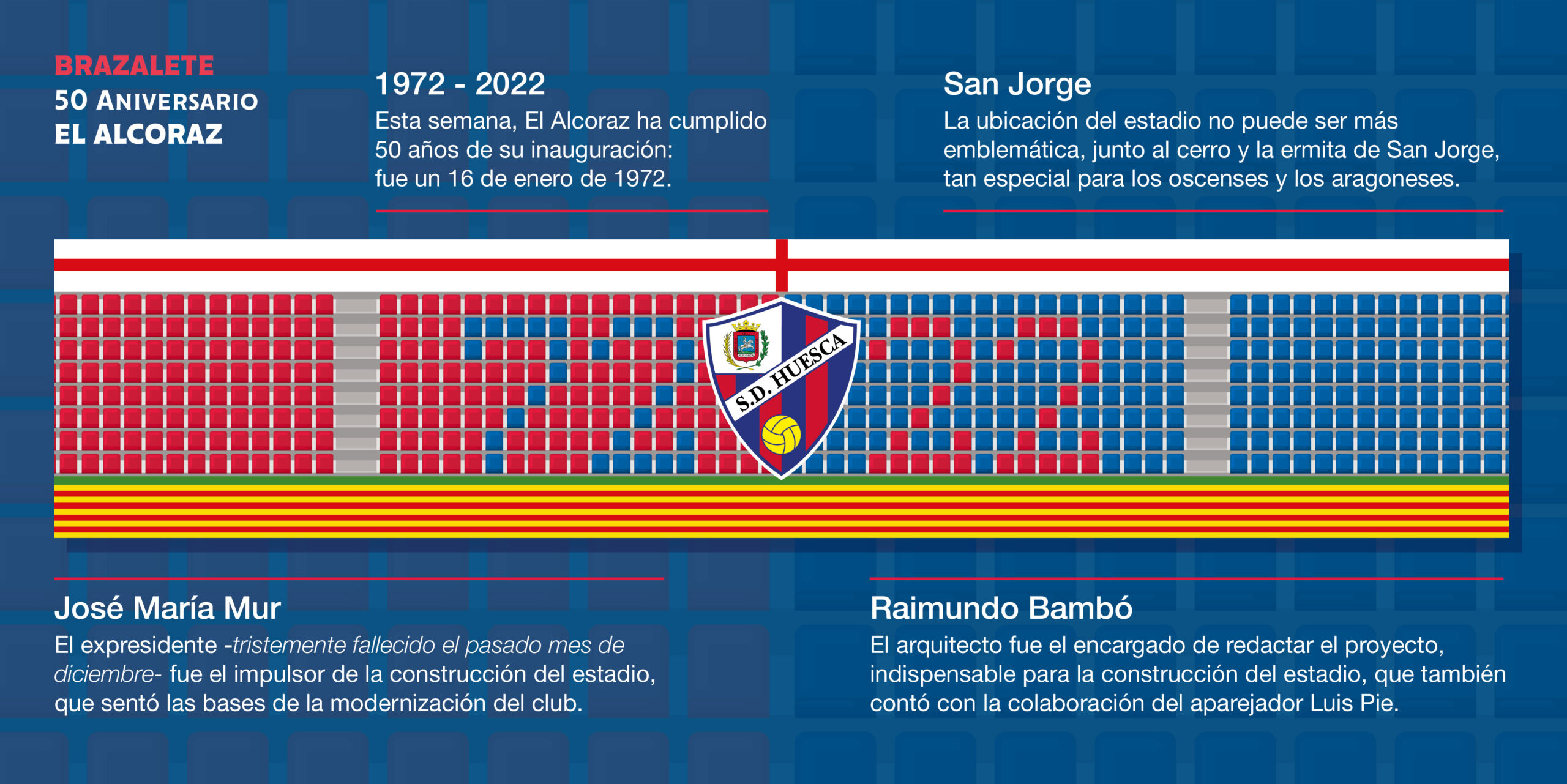 In the infographic designed for the anniversary armband above, you can see a couple of flags related to the history of the club and the stadium: the flag of Aragon at the bottom and St. George’s cross at the top. The figure 7222 is depicted on the stands, referring to the dates of the opening of El Alcoraz (1972) and the year when it celebrates its half-century anniversary (2022). El Alcoraz has experienced all the feelings, promotions, comebacks and boisterous chants, having its mascot Dragonés always present.

The opening of El Alcoraz on 16th January 1972, blessed by San Pedro’s priest Cándido Casanovas, saw a 2-1 win over Deportivo Aragón. The first goalscorers in the history of our stadium were Borbón and Mendiara. That day SD Huesca fans were eager to visit the new pitch, as it had been turned into green turf. At the time, this venue was described as “the fourth best stadium in Europe” by the French magazine France Football. But why is it called El Alcoraz? Its name was inspired by the Aragonese Battle of Alcoraz, which took place in 1096.

This is a unique armband in the history of the club, proud to be celebrating the 50th anniversary of the opening of many Oscenses’ and SD Huesca fans’ second home, who are well behind the side every weekend, making the temperature rise in a vibrant stadium.